Toy’s Iron Foundary was located on the site of the present day Fish & Chip Shop, near Helston Garages at the top of Meneage Street.

At one time a place of considerable importance in the town, it was the blacksmiths shop that always aroused curiosity of small boys. We used to sneak-up to the barn type door and watch the sparks flying when the smith hammered the hot metal, until ordered to move off by Mr Williams, who, I’m sure was a most inoffensive man really, but who looked very ferocious with his begrimed face. One word from him and we would nearly have the daylights scared out of us. 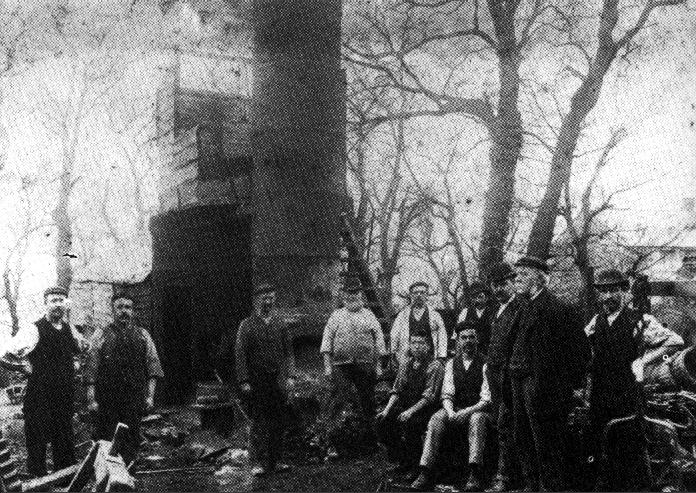 The dismal tolling of “TOY’S BELL”, calling his operatives to work, was a local memorial. One could set ones watch by it and when the tolling ceased it would be time to get going or someone would be late.

John Toy, the proprietor of all the activity, was a short stockily built man, always strutting around much as a hen would with a flock of chickens. John Toy was another of those gentlemen who always sported a buttonhole. However, at times this would be substituted by a minature watch which was a `local wonder`.

At the rear of the present car showroom was the workshops of Mr. Toy where the Cornish “Slabs” of cooking ranges were made. These slabs were a product that earned renown for Toy. Each bore a small brass plate proudly announcing the maker as TOY-HELSTON.

In addition he had a furnace where metal was melted down and drawn off into moulds for the various required purposes.

Clouds of sparks would emit from this appliance and must have been a constant worry to the occupants of the thatched cottages. Although a man used to be designated to stand-by with buckets of water as a precautionary means of extinguishing a possible fire, I have never heard of his services being needed.

There is a story which relates that John Toy had an employee named Willie Philpott whose job it was to drive a horse and cart to collect scrap iron and other metal as required. John Toy had decided to raise his wages 1/- per week, but Willie protested against this and persisted that if Mr. Toy did so he (Willie) would tender his notice and leave! What a treasure of a man.