Work began on Helston Railway Station in the spring of 1882 and the first train ran on 9th May 1887. For many years the railway played a big part in the town`s progress, but the advent of the motor car gradually undermined its existence and by the end the trains were running with very few passengers. I knew the line well as a schoolboy and it was a sad day when the last passenger train ran on 3rd November 1962. Final closure came on 4th October 1964, when the line fell victim to Dr. Beeching, the man appointed to prune the railway system.

My close connections with the branch very naturally enabled me to become familiar with the staff. In Helston the engine-drivers were Dick Williams, Phil Sampson, Bert Yelland, Tom Bickford and Norman Treloar, among others. I recall two signalmen, Horace Rowlands and a chap called Bert. There was a shunter called Bill Rundle and several guards, including George Harris, Charlie Kendal and a chap called Martin. There was a guard called Bill Nancollis, porters named Gluyas and Pascoe and a passenger booking clerk, George Anthony, who eventually terminated his railway career as stationmaster at Plymouth North Road station. A Mr Cowles was also in the booking office.

There was a train every hour in those days, including the connecting train for the Cornish Riviera Express, which linked up with the main line at Gwinear Road, so the signalman wasn’t kept very busy. There was plenty of time for chatting between cups of tea.

Then there was old man Philip Brenton Hancock, the stationmaster at Nancegollan, who had been there since the line opened. He always used to preface every remark with “Ah, ah, my friend…”

The parcels clerk at Helston station was Jack Hawse, who had an unfortunate speech impediment. He could not speak very plain English and we boys used to say he was “Jack Hawse who talks through his nawse” -not a very nice thing to say, really.

The stationmaster at Helston was W I French, who was quite an important person in his day and was always addressed as “Sir”.

Alf Knight was one of the last stationmasters I can recall at Nancegollan.

Terence Williams was the last stationmaster I can remember at Helston. He was a very remarkable and sociable person, liked by everyone. In his spare time he was also the Captain of St. Michael’s Church Bell Ringers. (From Graham: I can still remember “Mr Terence” as he was known to me when my father Fred used to take me to Penzance Station in the late 1960’s. “Mr Terence” worked in one of the station offices and always made a real fuss of me. On one particular visit I remember him giving me several enamel BR train badges which I still have in my toy collection.)

There was also a Mr Robertson, who died on a train journey between Gwinear Road and Hayle.

At Praze-an-Beeble, Mr Lawry was stationmaster. He had a very high-pitched voice and would appear from the station office announcing “Praze! Praze! Praze!” It has been recorded
that, during troop movements in the last war, Mr Lawry met the incoming train with his usual greeting – “Praze! Praze! Praze! – when a coloured GI pushed his head out of train window and
shouted “Hellejuhah brother!” There were a number of porters at Praze over the years, but I can remember onlt two chaps called Roberts and Kersey, the latter of whom became Constable
Kersey.

All of this was during the heyday of the railway. But, of course, big changes were to come on the Great Western Railway – and especially for the Helston Branch. There were staff reductions as rail traffic declined. Three stationmasters on the line were reduced to one, with Mr. Williams – the last stationmaster on the branch – having responsibilty for Helston, Nancegollan and Praze. He was regarded as a most efficient official and enjoyed the confidence of both the public and his staff. There was even a Mr.Churchill who served as stationmaster at Nancegollan, but I can`t remember his first name.

I suppose some of my happiest days were my railway journeys to school. For about four years I travelled five days a week (except holidays, of course). Many hours did I spend peering through the windows of the train, watching the ever-changing landscape.

My first acquaintance with the railway in Helston was during my schooldays. My family had moved to Nancegollan in 1914 and I travelled daily into Helston to attend the Wesleyan School in Wendron Street. Every day I boarded the little train, consisting of a locomotive and two coaches, which plied its way along the single-track. The coaches were illuminated by gas and a man used to come round to light the mantles. For a time a coach was used which had a dynamo underneath and this lit the lamps. I remember it made a peculiar whirring noise.

I recall that the train was pulled by one of two locomotives which worked on the line – a 2-4-0 and an 0-4-2, both of which puffed their way between the stations en route, Gwinear Road,
Praze, Nancegollan and Truthall Halt, which was built for the convenience of the Prideaux family, who were shareholders in the company. The station at Nancegollan was later extended to handle the materials for the Culdrose Air Station development.

I became acquainted with the names of the farms en route. There was Barcus Farm, run by the Williams family, Prospidnick and Lower Prospidnick Farms, run by the Nicholas and Prior families, and Penpraze Farm, run by Sam Adams, who always wore a bowler hat. It was said by some that he slept with his hat on. There was also Ganges Farm, near Prospidnick Arch, which was the biggest stone arch on the Helston branch railway.

It was always interesting to note the harvest seasons in progress, and that Farmer So-and-So was cutting his corn crop. There would be three horses pulling a self-binder – tractors were yet to come. The binder or corn-cutting machine was, in itself, a comparatively new introduction into the agricultural world. I spent many hours of these journeys reading Boys Own Paper, or Union Jack, recording the exploits of Sexton Blake, the detective who solved every crime, aided by Tinker, his assistant, and bloodhound Pedro (No criminal ever escaped!)

In those days, train carriages were divided into first, second and third class, presumably to represent the social divisions of the day. I hardly dare look at the first-class folk! Later, second-class was abolished. 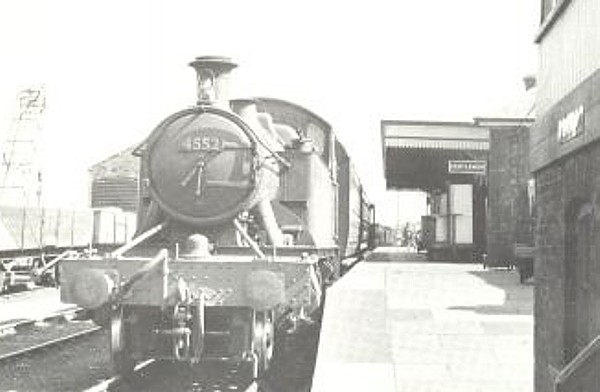 The spread of the motor car put paid to the Helston branch-line. People were too tired to walk up to the station. I can remember during its latter years that there would be no more than two or three people on the train and , as you know, you can`t run trains on fresh air. By then you could wait for an hour on a cold platform, or in an equally cold waiting room, for the mainline connection at Gwinear to come along. It was obvious by then it would have to close. When the line was built, they believed people would be prepared to walk miles to the station, but latterly no-one was going to do it. The line finally closed in the Sixties when Dr. Beeching chopped up the British railway system. It was very sad, but I don`t suppose there was any future for it.

Finally, one amusing story I recall about the line was the time a chap got into a first-class carriage. The stationmaster shouted “Are you first-class, my man?” to which the passenger replied “Yes thanks – I never felt better in my life!”